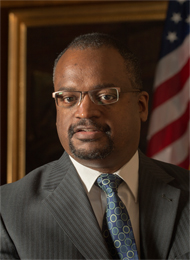 Judge Robert L. Wilkins was appointed to the United States Court of Appeals for the District of Columbia Circuit on January 15, 2014. A native of Muncie Indiana, he obtained a B.S. in Chemical Engineering from Rose-Hulman Institute of Technology in 1986 and a J.D. from Harvard Law School in 1989. Following law school, Judge Wilkins served as a law clerk to the Honorable Earl B. Gilliam of the United States District Court for the Southern District of California. In 1990, he joined the Public Defender Service for the District of Columbia, where he served first as a staff attorney in the trial and appellate divisions and later for several years as Special Litigation Chief. In 2002, he joined the law firm of Venable LLP as a partner, handling white-collar defense, intellectual property and complex civil litigation matters. During his tenure with the Public Defender Service and in private practice, Judge Wilkins served as the lead plaintiff in Wilkins, et al. v. State of Maryland, a landmark civil rights lawsuit that inspired nationwide legislative and executive reform of police stop-and-search practices and the collection of data regarding those practices. Judge Wilkins also played a key role in the establishment of the Smithsonian National Museum of African American History and Culture (scheduled to open in September 2016 on the National Mall), serving as the Chairman of the Site and Building Committee of the Presidential Commission whose work led to the Congressional authorization of the museum and the selection of its location. As a practicing lawyer, he was named one of the “40 under 40 most successful young litigators in America” by the National Law Journal (2002) and one of the “90 Greatest Washington Lawyers of the Last 30 Years” by the Legal Times (2008). On December 27, 2010, Judge Wilkins was appointed United States District Judge for the District of Columbia, where he served until his appointment to the D.C. Circuit.